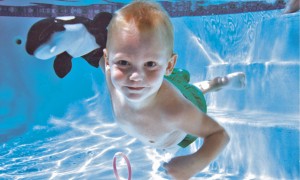 We like to say that we teach kids to be water smart – but what if swimming lessons actually made your child smarter altogether? This was the question posed by researchers at Griffith University in Australia – a country famous for it’s water sports. The study, conducted from 2009 through 2012, collected almost 7,000 questionnaires from parents of children under five years old in swim schools around world (including Academy Swim Club!) The researchers also independently assessed over 200 children in swim schools in Australia. Although the last year of accumulated data awaits analysis, their initial findings have been published.

Just as we suspected, swimmers are smarter.

It seems babies and toddlers that participate in swim lessons are hitting milestones ahead of schedule – and before their non-swimming peers, regardless of social or economic background. The swimmers are not just excelling physically (i.e. running, jumping, climbing trees), which you would expect from lessons that teach a physical activity, but also in the areas of cognitive and language development. Basically, early swimmers are primed to do better in school.

Not all swim schools are created equal. As the researchers noted, there is considerable variation in swim programs that may influence the quality of learning, so choose wisely when deciding where your child will receive swim lessons.

To read the study go to www.griffith.edu.au and search for Early Years Swimming.