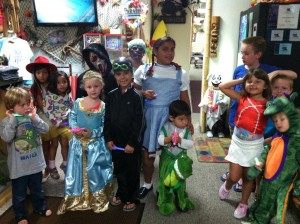 Move over, Stephen King.  Step aside, Dean Koontz.  The swimmers at our annual Halloween Love’Em and Leave’Em crafted a spine tingling tale sure to make you scream.

Ryan: There once was a group of kids that went to a haunted swim school.

Hunter: There was an ear sitting on the floor and it turned into a giant cheese.

McKenzie: They looked back and saw a giant spider.

Matthew: They turned around and they saw an electric eel.

Claire: Then they went and they saw a big seahorse and the seahorse’s friend was an otter.

Christian: A seal ran away but he had no flippers and he tripped and he bumped into another monkey sitting on the stairs.

Jacob: There was a dinosaur that said, “Roar!” and it was looking for a monkey.

Juliana: (She was too scared.)

Giselle: Somebody went to the bathroom and there was a dead foot in the toilet.

Mia: They ran out and the found a dead zombie head.

Ben: They ran back into the lobby room and there awaited a giant pumpkin.

Alex: So they turned around and saw a giant spider.

Eduardo: They were going to turn around and run the other way, then all the lights turned off.  Nobody escaped the haunted Swim Club again.